Reposting this to the LJ because frankly, LJ is just easier for dealing with comments or conversations about the posts and updates! 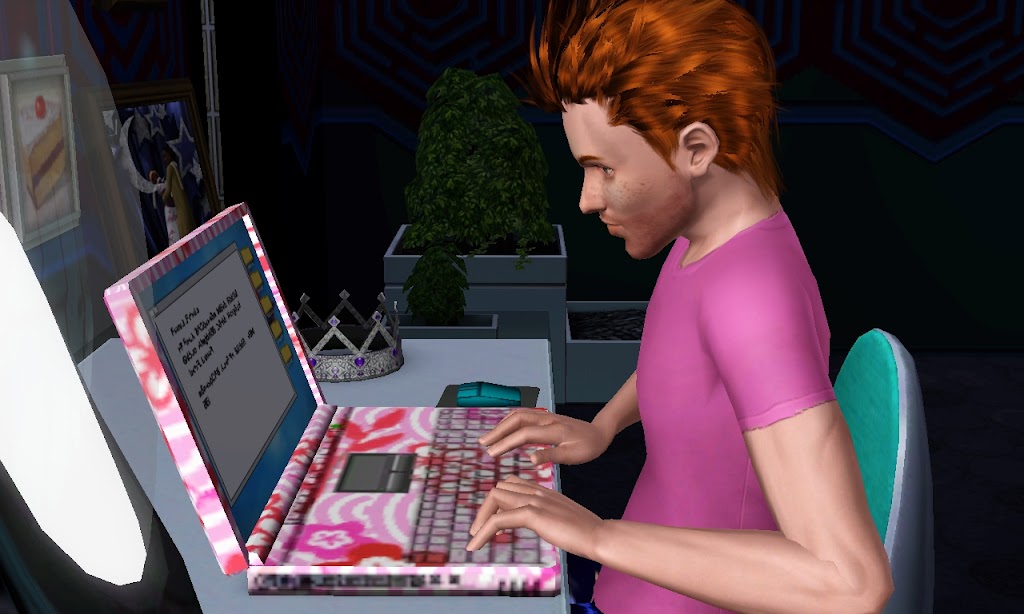 Thomas has taken to immersing himself a bit more into his writing. While he's dealing with Peter's loss as best he can, he's been looking more and more gaunt and haggard. Way to go, Thomas, you're the picture of the scruffy, reclusive writer.... 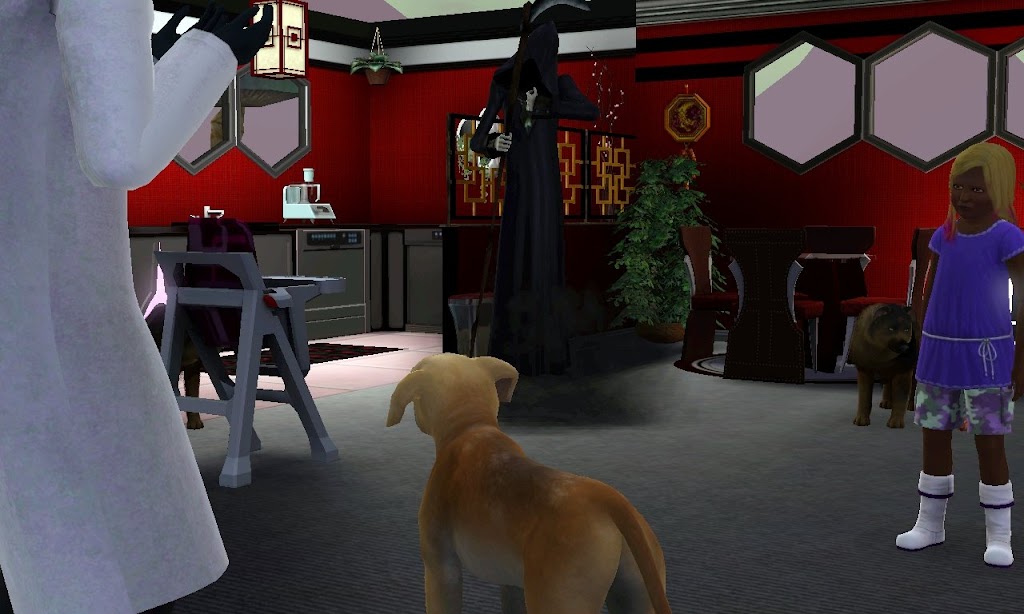 Nonetheless, his currently emotionally frail state's about to get shaken up again. Once again, our 'friendly neighborhood Grim Reaper' arrives.... This time for Star. Destiny watches, stoically, perhaps not effected by all of this? 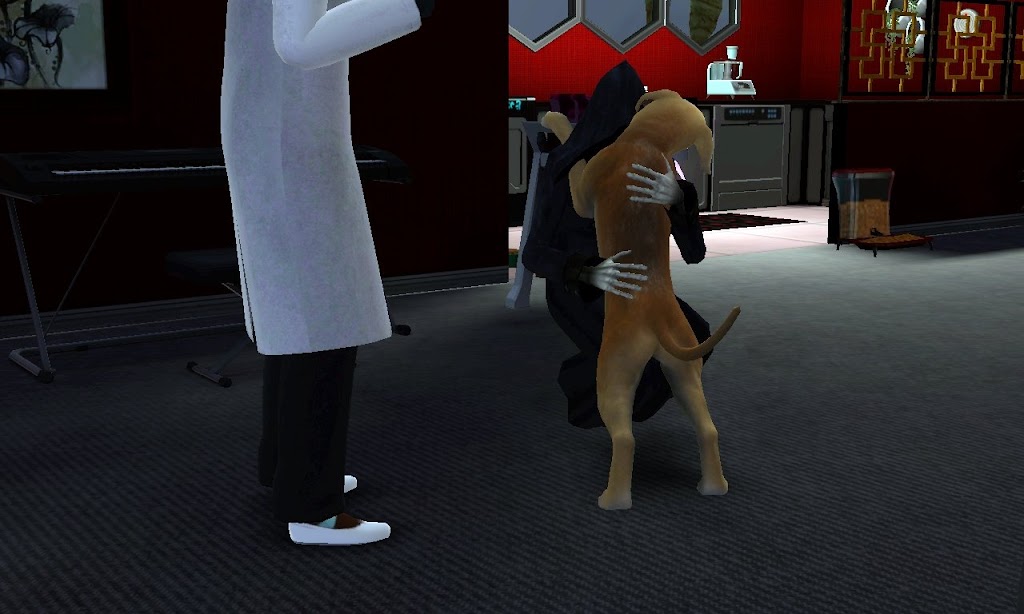 Despite the sad moment, Grimmy does his best to show compassion and that he's taking Star to a happy place. 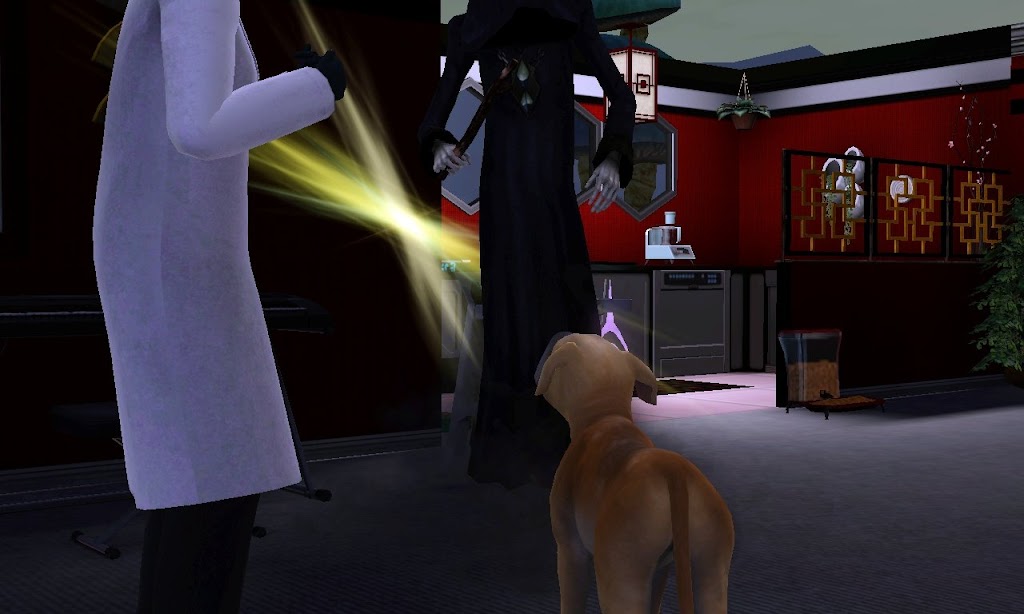 "That's a good boy, Star! You've been a loyal puppy, found wonderful treasures and protected them all. Ready to go play? Cosmo and Peter are waiting for you! C'mon, boy! Let's go!" 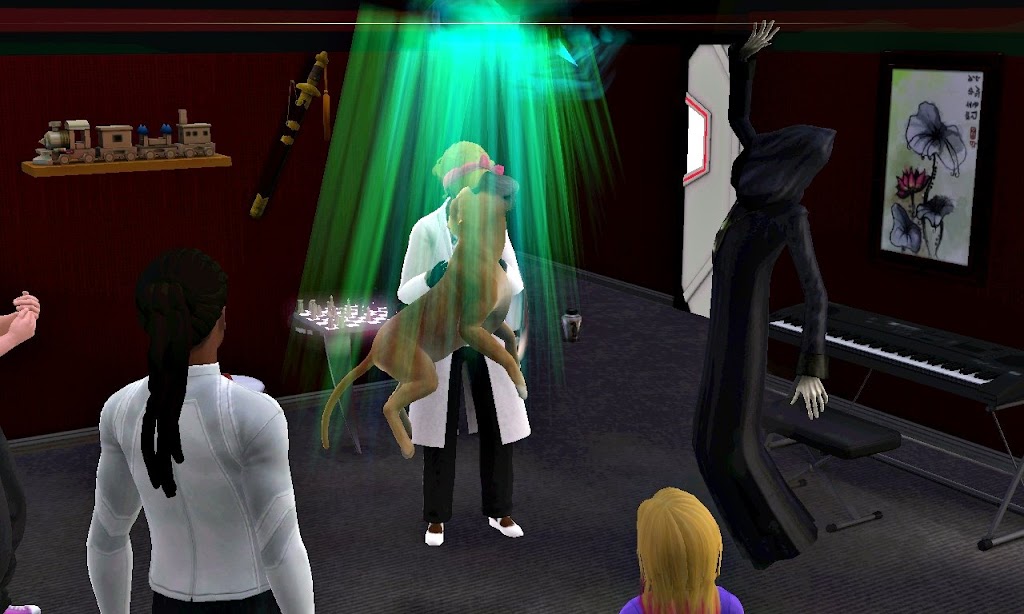 And with a happy leap, Grimmy tosses the stick for Star to guide him through the mystical, Rainbow Bridge. 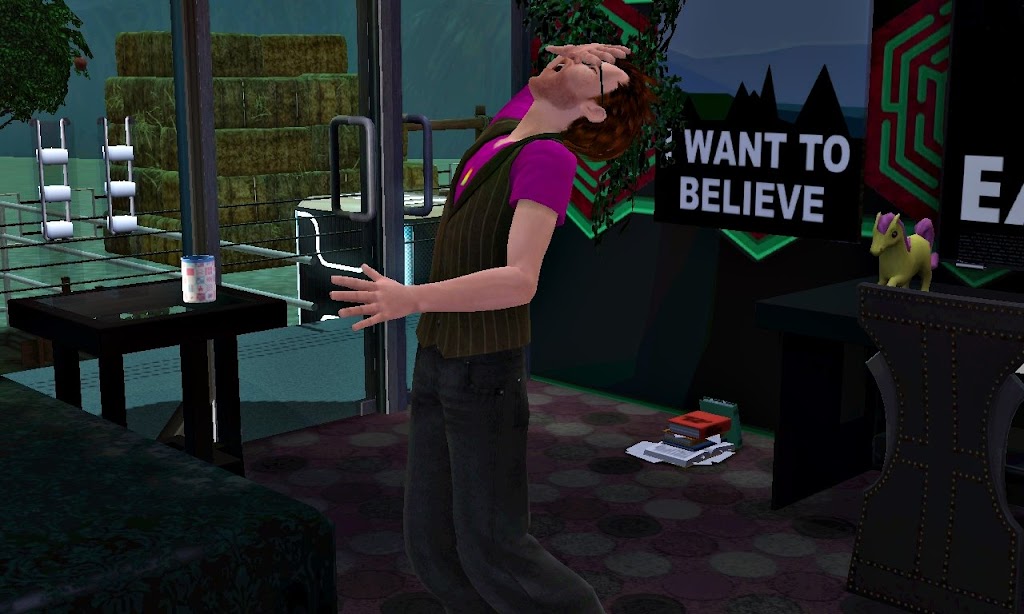 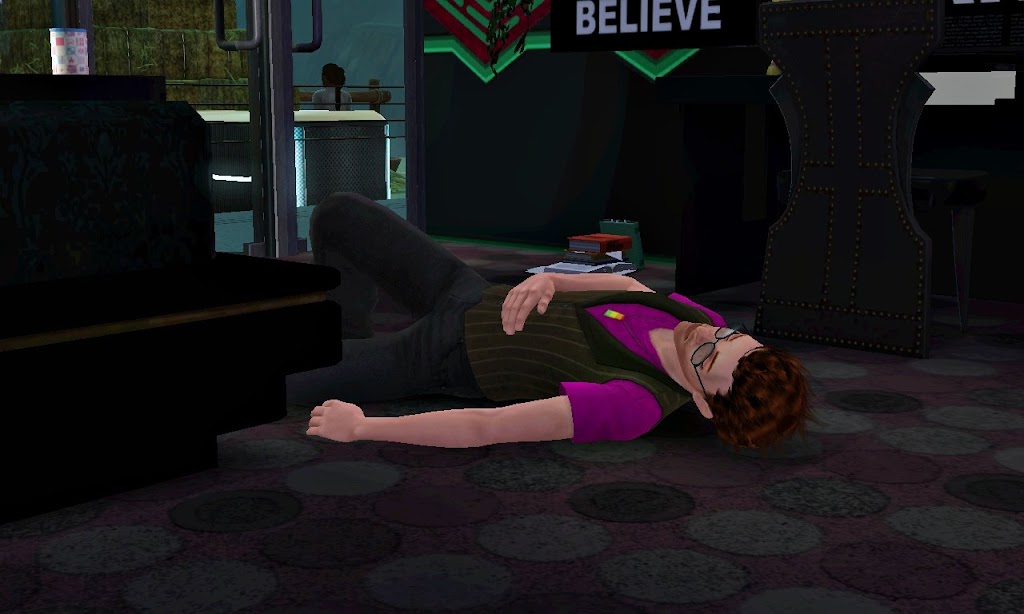 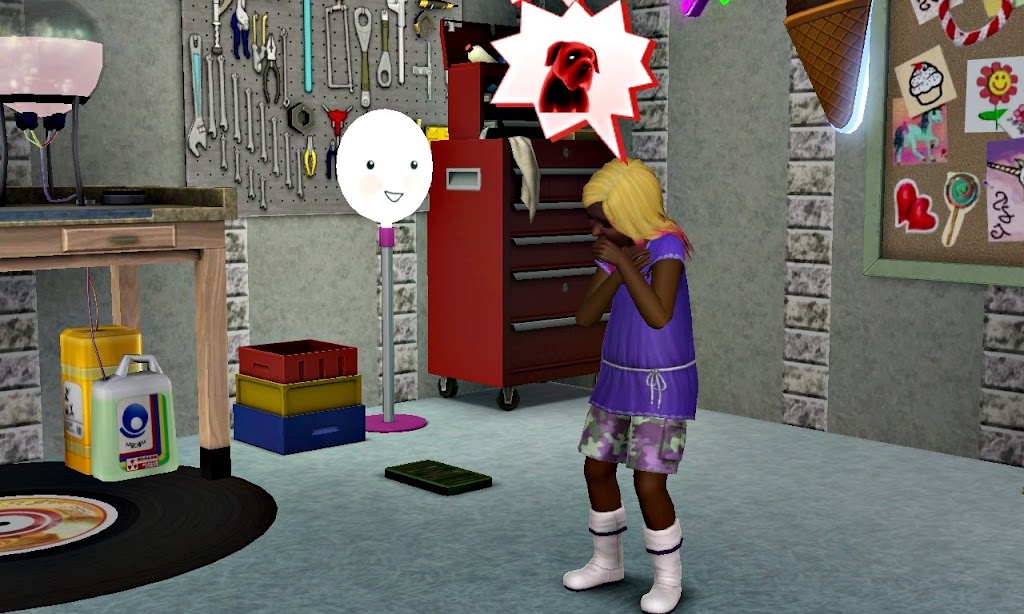 Once in the quiet, whimsical colored lab, Destiny finally lets her own pain out, bawling for Star. 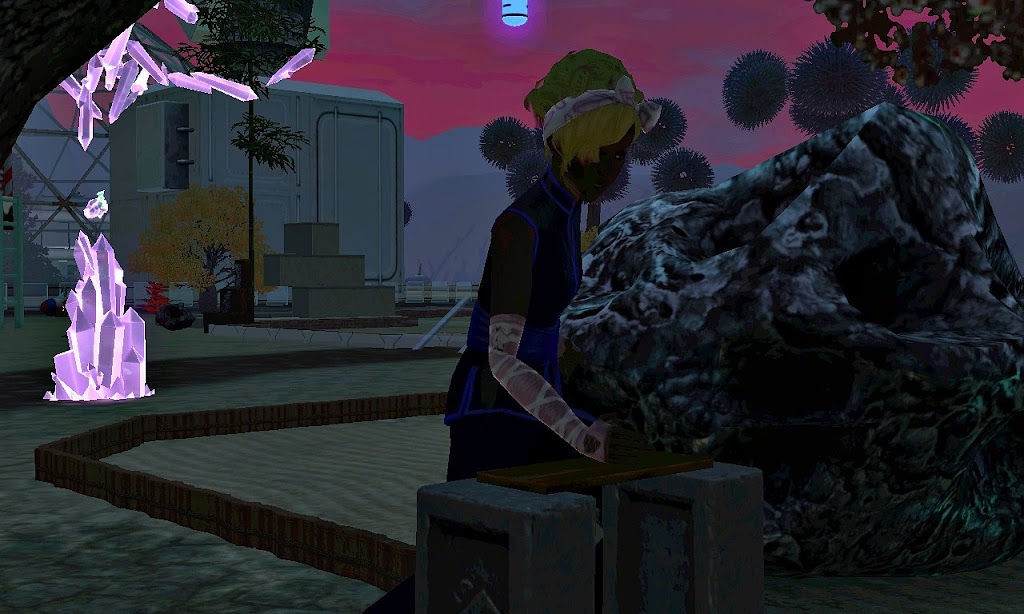 Karma deals with the loss of her best friend in th only way she can.... She vents her pain and frustration on particle board! 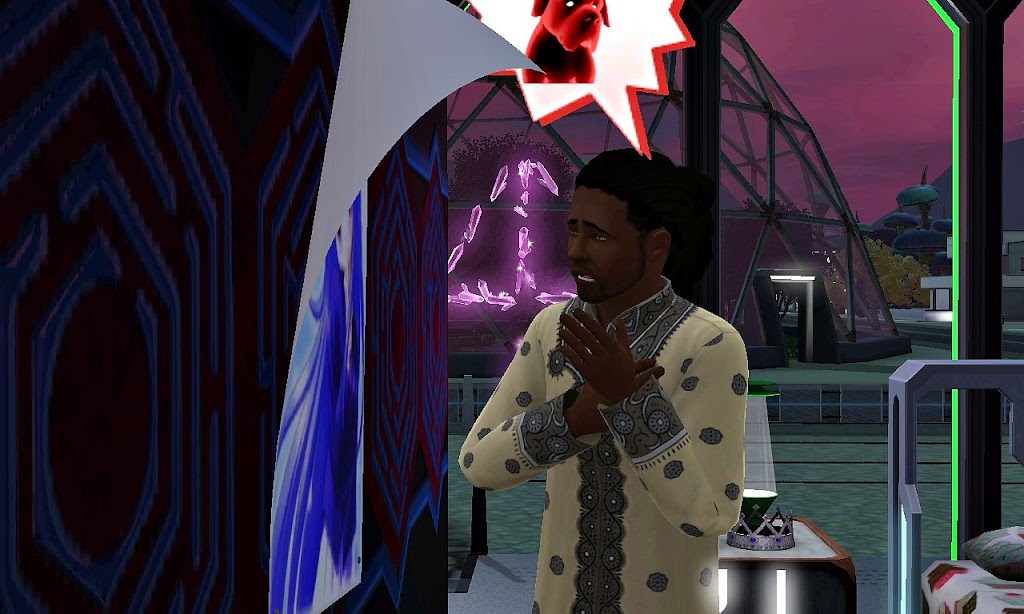 Jarod, surprisingly, is the one the most effected. He had never really made his peace with Star and he regrets not ever fully warming up to Karma's dog, like he should. 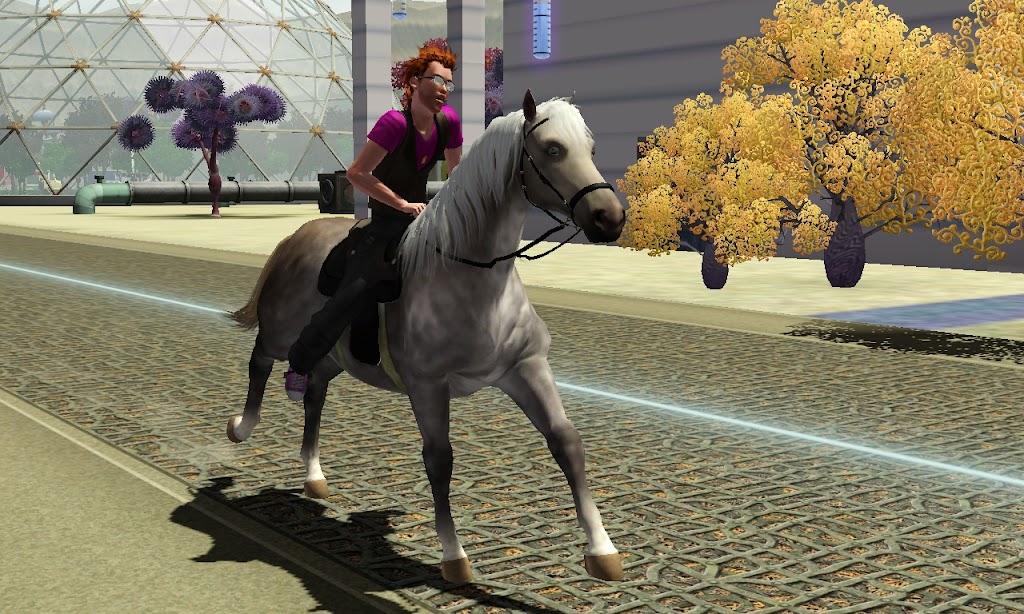 Thomas begins to take more rides on Storm, however, to deal with it all... 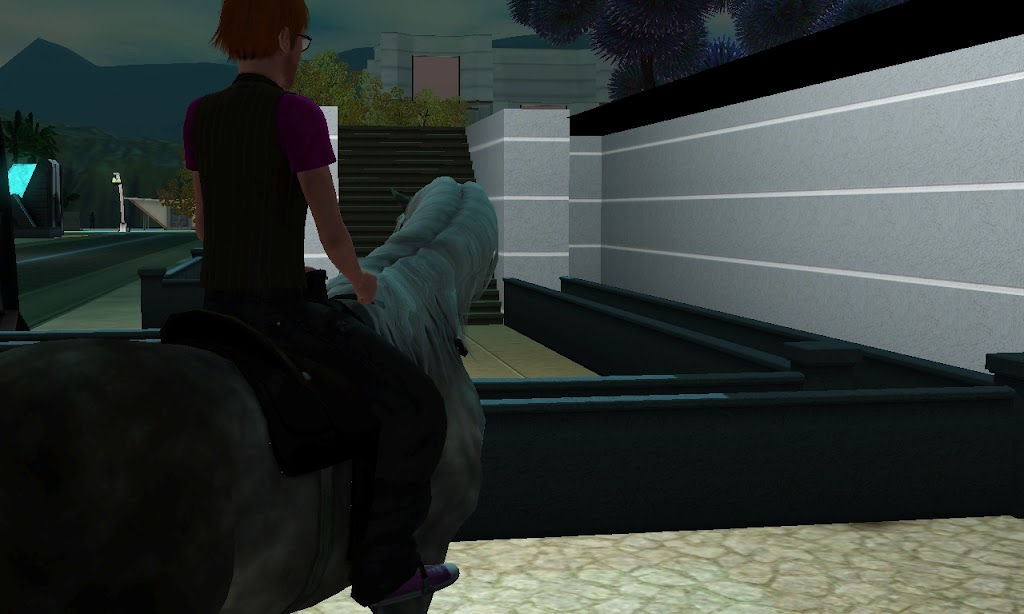 He'd also begun to get a bit more disheveled looking, his hair not neatly spiked up begins to droop and look messy. He's really working on that scruffy look.... Still, he's finding solace in his rides on Storm. 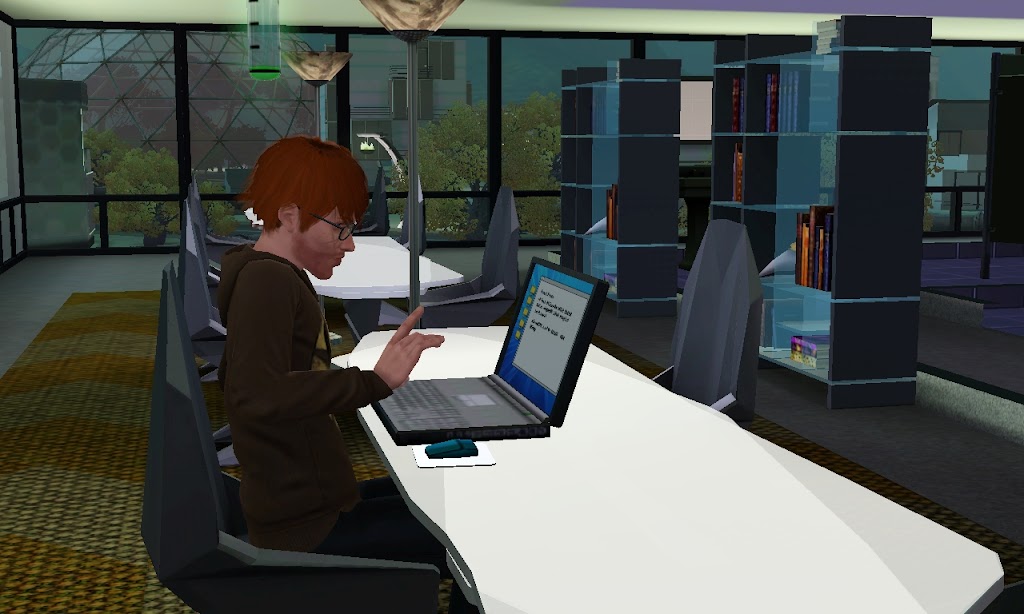 And his quiet nights at the library, writing. A little escapist romance-heroic, he works on a novel called Spandex & Lust. Hopeless romantic is hopeless. 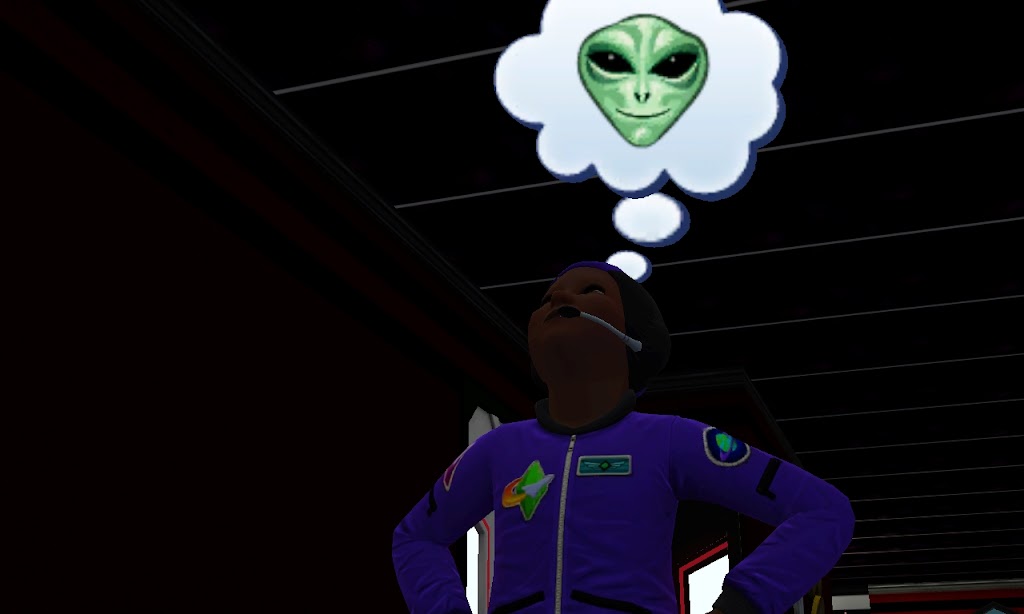 Meanwhile, Destiny continues her dreams of seeing those Earth aliens and other aliens beyond Lunar Lakes! 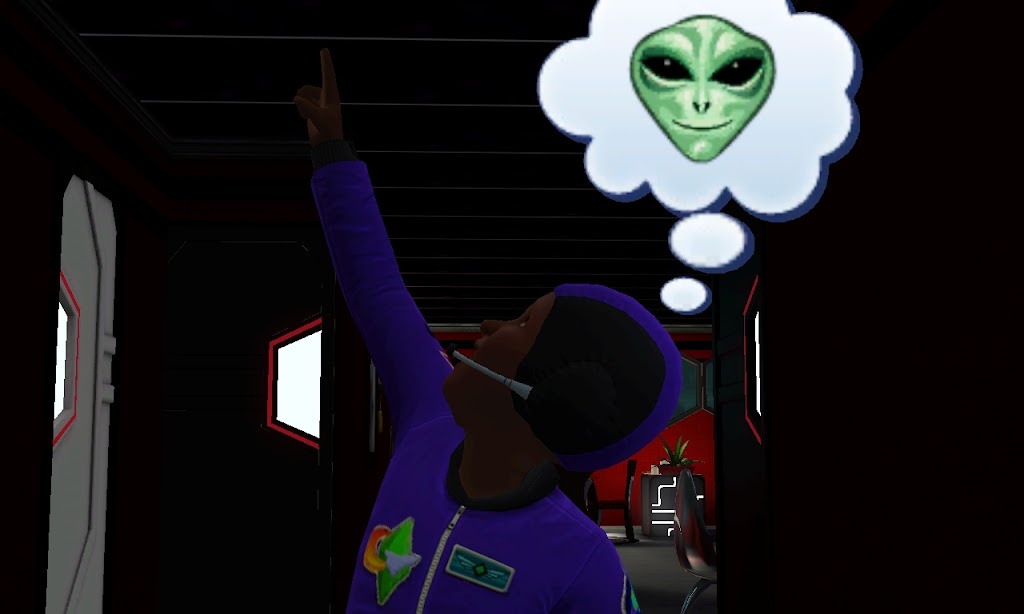 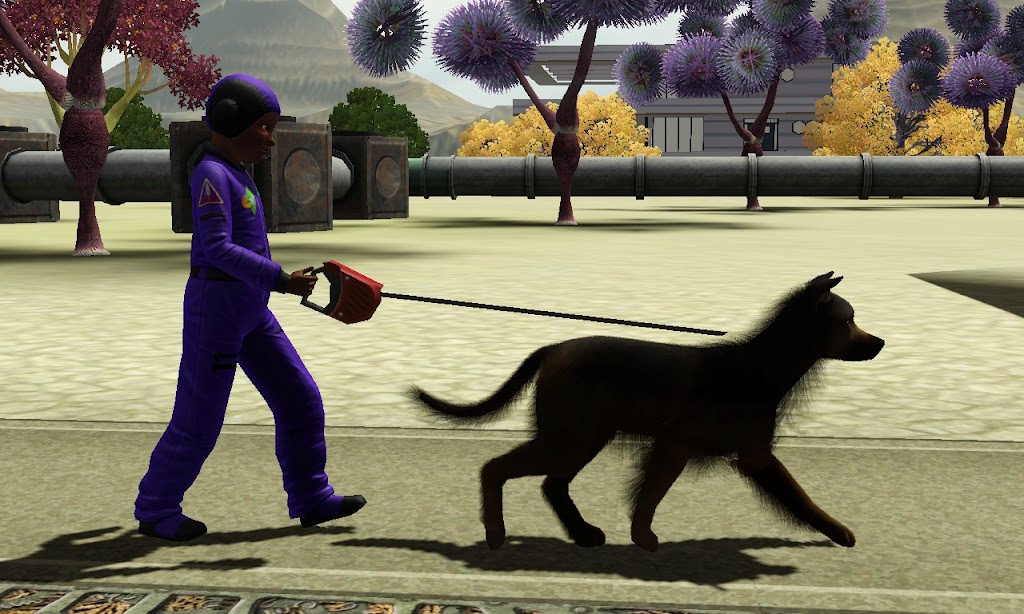 All this in between the usual chores! Like... walking the dog! Proof you CAN dream big and do your chores at the same time! 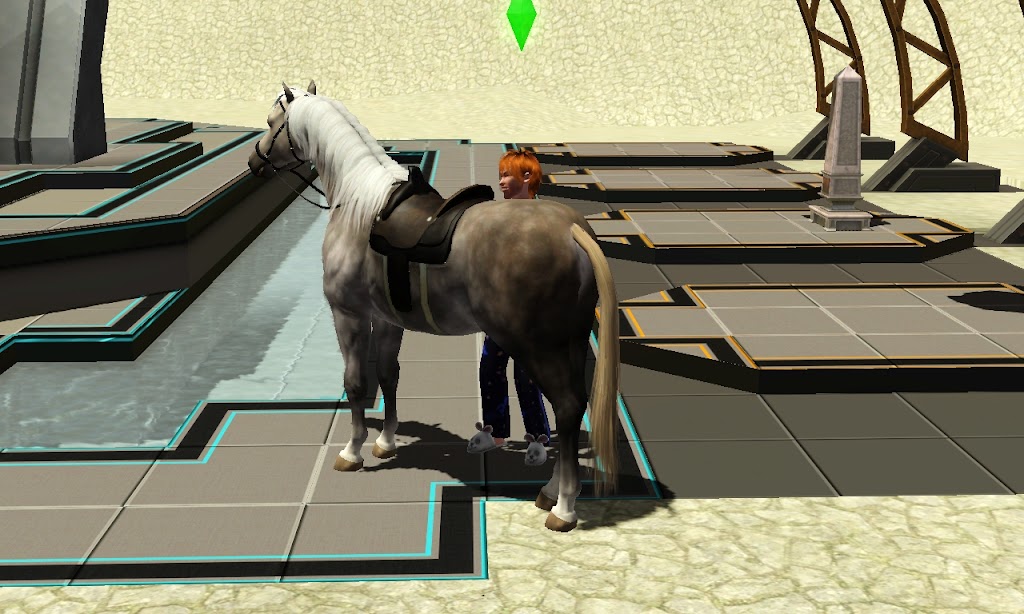 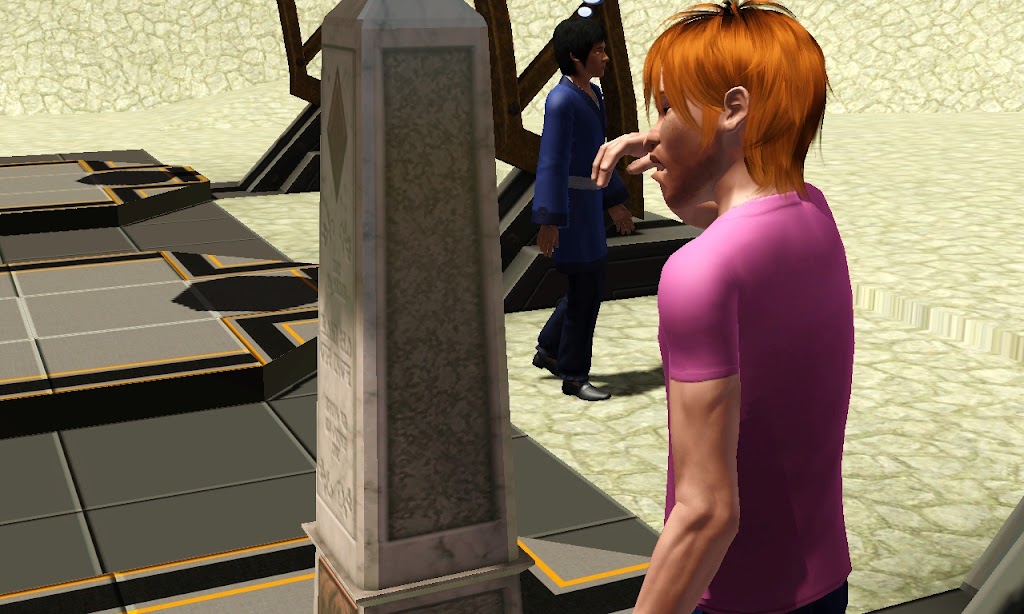 Thomas' visits to the local cemetary to mourn Peter grow more frequent, to the fact that Karma's beginning to get very worried about him. 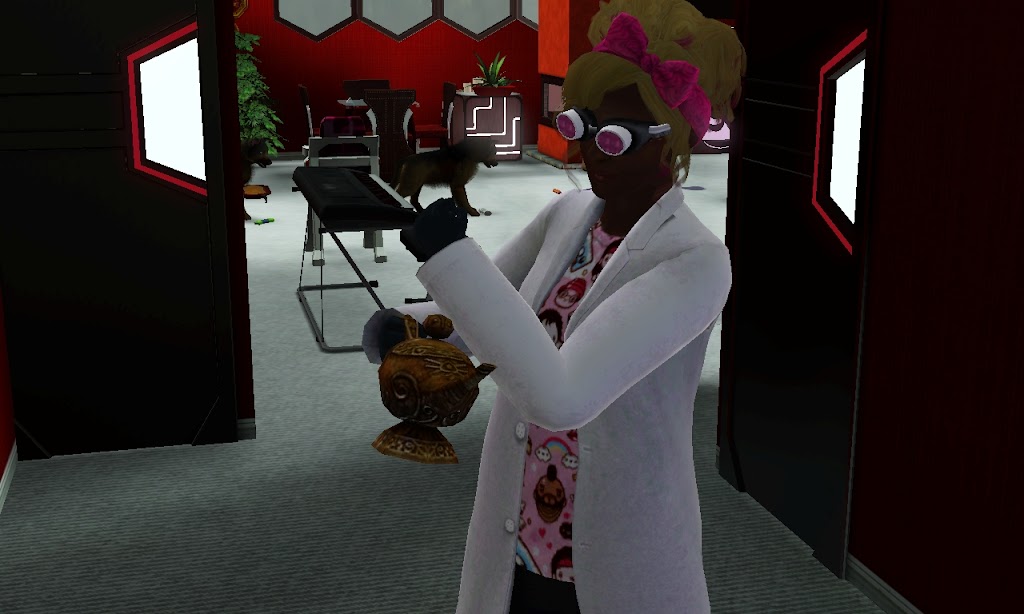 It's time to take matters at hand. She digs out an artifact she'd been doing research on since before Peter's death and now's the time to see if it works. For SCIENCE!... er magic. She scientifically rubs the lamp to see what sort of effect friction and static will have on the lamp. 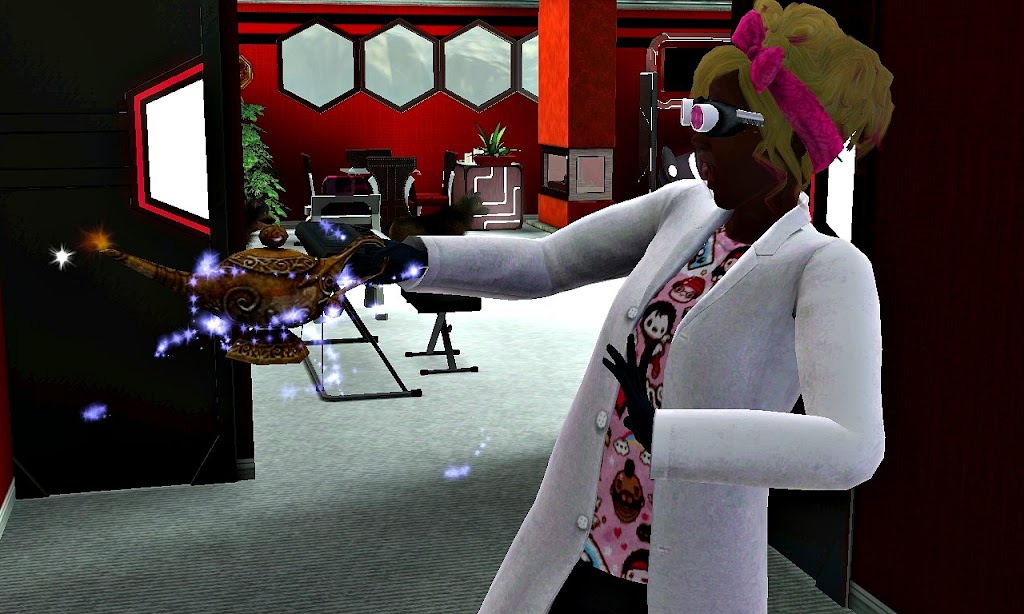 She expected static discharges.... not sparkling and smoke!